Join us for our 6th birthday show ! What a lot has happened since we started broadcasting and we continue to bring you a Type1 perspective on it all. Sheila from Frome Stop War will pop into the Lounge to tell us about the upcoming Media On Trial event next month in London. In the 2nd hour we are joined by our good friend Freeman Fly who drops in the the Lounge to wish us all a happy Type1 birthday and delve into Space War News, Weird Stuff, plus news, chat and music… 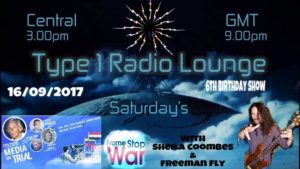 Frome Stop War will be transferring its very successful ‘Media on Trial’ event to London in October, now with additional speaker the legendary investigative journalist John Pilger.
The media’s complicity in disseminating propaganda for war by manipuation or omission of pertinent facts as well as alleged outright fakery will be discussed.
The panel comprises John Pilger, Vanessa Beeley, former US Ambassador to Syria, Peter Ford, Prof. Piers Robinson, Robert Stuart, Professor Tim Hayward and Patrick Henningsen.
This is an historic event with speakers who are all experts in their field – ONE NOT TO BE MISSED!
Tickets are available on the door or through Eventbrite:Media on Trial Tickets