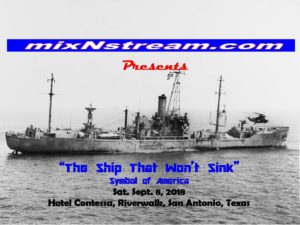 The Ship that won’t sink !

Please go to Mixnstream  – for only $10 per person, you or anyone anywhere can place an advance order for videos of all the speakers.

…Hear Phil Tourney and Dave Gahary, US Navy veterans and authors of Erasing The Liberty, recount the events of June 8, 1967 aboard the USS Liberty, the most decorated ship for any one event. Also learn why they have plans to make a full length motion picture of that traumatic victory that should live in the hearts of all Americans.
The USS Liberty has become the symbol of the American People who feel they have been abandoned by those in office and those who control the military. This is the story of a ship and crew what were used in hopes of drawing the U.S. into war on behalf of Israel in 1967. The Liberty was knowingly attacked by Israeli jet fighters and abandoned by the President of the U.S. and meant to be sunk by both parties. But God intervened on that day in spite of all the designs of the powerful. Let us pray that God intervenes on behalf of America and that she remains afloat and is spared from the schemes of those who want her in the depths of slavery.
This is a fundraiser for the speakers and their projects. The proceeds will be split between them after expenses for the event have been paid. These men have worked hard to bring you this information so please support their work and projects by watching this event. 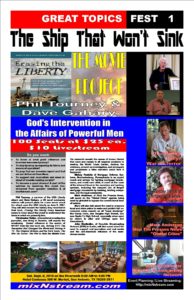 Our good friend Mark Anderson will be speaking at this event. He will speak on the “Global Cities” agenda being used by globalist to bypass the constitutional laws of nations. Mark will also talk about the need to pressure local and state police to make and publish full un-redacted crime reports on all “mass shootings” like Sandy Hook, and Douglas High School, and now Santa Fe High School, especially when used by others to alter and infringe upon 2nd Amendment.
http://www.thetruthhound.com/