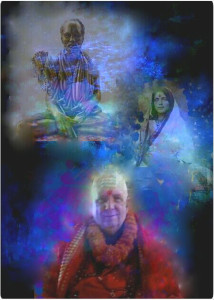 Namaste & blessings, on today’s Meditative Living with Swami Shivananda Giri we continue our work with the Chidakasha Gita of Bhagavan Nityananda of Ganeshpuri from verse 266.

266. O Mind! Enter the house of Ananda! When the whole area is flooded, we cannot distinguish the wells and tanks in that area. Because there is darkness, we must infer there is light. When you taste sweet things, remember there are pungent things to be swallowed. What is the state of Jiva when Jiva has realized that the Atman is not the body? Such souls have attained their pristine condition. “I” and “mine” are not visible to the physical eyes. “I” and “mine” are not to be found above the tip of the nose. That which is above these, has neither beginning nor ending.  A visible object has a beginning and an ending. Since Atma is invisible to the physical eye, Atma is without beginning and ending. It is impossible to lessen the power of Atman because Atman is always constant. Just as space is homogeneous everywhere, so is the Atman the same everywhere. The head of man is the abode of the light, of millions of suns. Which is bigger, the eye or the sun? If the eye is spoiled, is it possible to see the sun? So the eye is more important. The form of gold images is the creation of the mind. When a man is photographed, the picture is according to the posture of the sitter. The virtues and the opposites in the photographer are not seen in the picture.

About Swami Shivananda 39 Articles
Swami and instructor of Mahadeva Mahayoga©.